In the summers of 2017, I moved miles away from home to a distant land with a completely different culture. Life had never been the same. I have found a kind of second home in Darmstadt. Darmstadt with around 122sqKm and around 160k people is a nice university city located around 25Km away from Frankfurt, the business capital of Germany or EU in the state of Hessen. Once you live in a place for so long you can’t help but explore it and try to draw a comparison with your homeland. In this blog, I tried to pen down a few things that I discovered about this beautiful city.

The name Darmstadt– The word Darm means intestine in German. So why would a city be called Intestine City? It’s because of this tiny stream called Darmbach. Which runs through the city like an intestine.

Wissenschaftstadt Darmstadt – It is also called Wissenschaftsstadt, which means Science city. The city is the house of two renowned Universities of Germany. TU Darmstadt is a member of TU9 which is an alliance of top universities of Germany. It is considered among the top 3 universities in Germany and also one of the best universities globally. The University is associated with Nobel laureates and Albert Einstein has himself said in 1919,” In my opinion, you definitely ought to go to Darmstadt, they have a good Technical School there.” 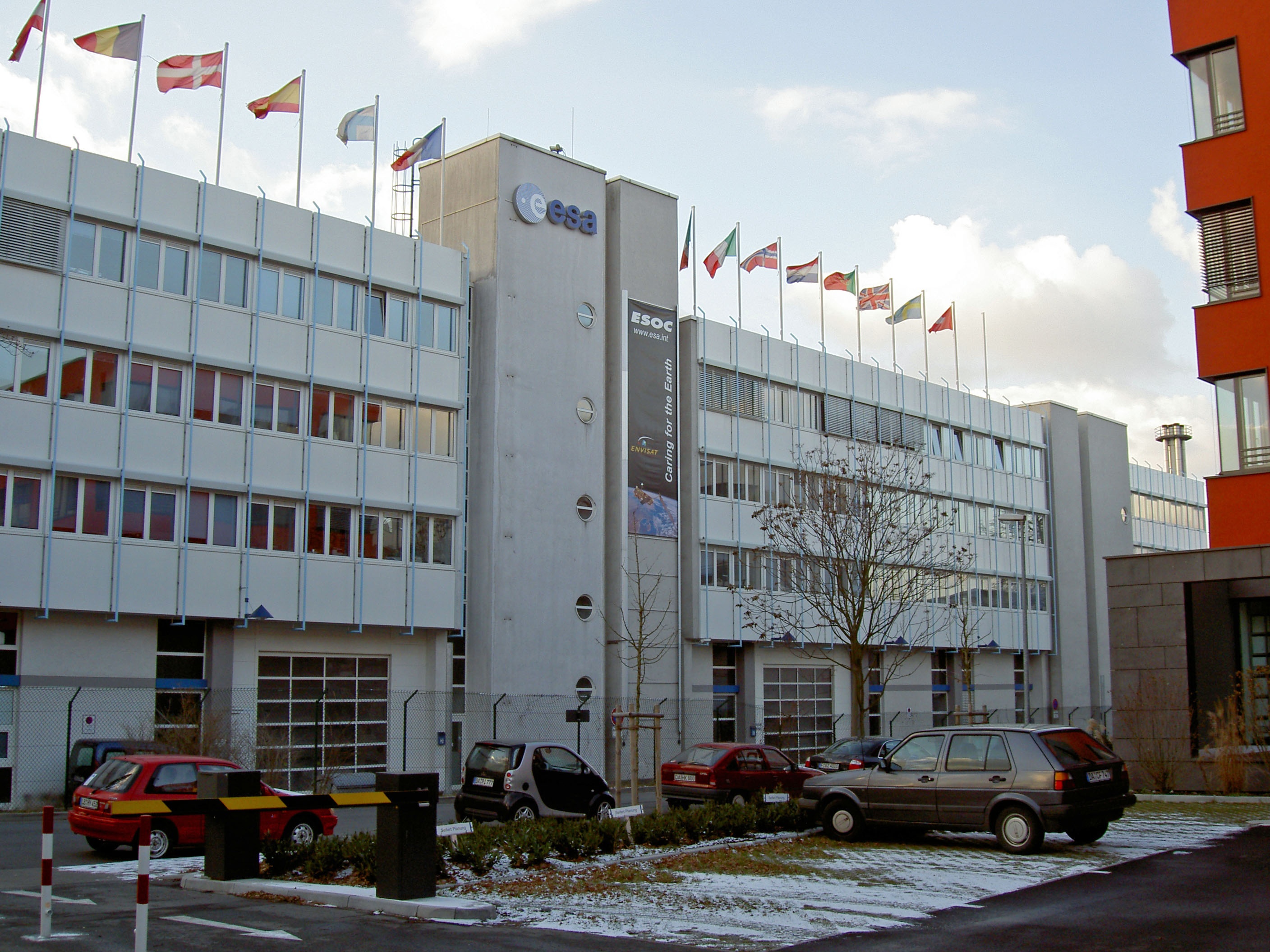 Digitalstadt Darmstadt – In 2017 Darmstadt won Digital city competition with the support of many Darmstadt institutions and companies. As a result, Darmstadt is equipped with latest IT-infrastructures. It has Free Wifi and many locations and also in public busses. It also has environmental sensors installed at various places and the city traffic is planned to be redesigned to minimise environmental pollution. It also has smart trash bins, parking lots etc. The city also leads in cybersecurity-related awareness. Modern features like automated Tram (MAAS Bahn) are also in the pipeline. As a result of all these Darmstadt repeatedly takes first place in “City of Future” ranking among German cities.

Lilien – In Germany almost all the conversation involves Football and all cities have a football club. The passion for club football is more than National Football. The people of Darmstadt are often called as Lilien because the logo of the Darmstadt’s main football club, SV Darmstadt 98, has a lily in it.

Merck – There are many prominent German families, one among them is Merck. Although the family has its roots in Bavaria the family has influence in Darmstadt. Merck happens to be the world’s oldest pharmaceutical company and is headquartered in Darmstadt. It is also the largest employer in the city. The home ground of the Lilien’s is also called Merck stadium. 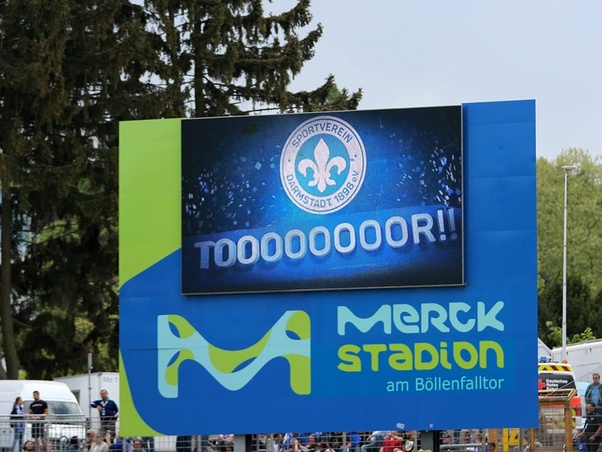 Frankenstein – In the suburbs of the city is the Mount Frankenstein on top of which stands the Frankenstein Castle. The mountain and the castle has been associated with several legends and myths. for example Lord George and the Dragon, Fountain of Youth etc. It is also thought that Mary Shelley, writer of Frankenstein, got her inspiration from this castle.

Tagore – The city has close relations with India. Rabindranath Tagore won his Nobel prize in 1913 and had become a sensation. It was hard for people to believe that someone from Asia could win a Nobel Prize. Post World War I and Germany’s humiliation, the Germans were looking for a someone who would re-establish their self-esteem. In 1921, Tagore made his first visit to Germany and Tagore chose to visit philosopher Count Hermann Keyserling in Darmstadt. The romantic flair with spiritual idealism of Tagore’s poems appealed to Germans. Whenever he spoke the halls were packed. He also called Darmstadt, “Dharma Nagar”. Tagore also visited Germany on two separate occasions.

Merck family was also a big fan of Tagore’s work. Elisabeth Wolff-Merck had personally translated his play Chitra from English into German. The play was published in Germany in 1914, one year after the Indian poet received the Nobel Prize, and went on to become a best-seller.

Mathildenhoehe – The Mathildenhoehe is a big landmark for Darmstadt and the Hochzeitsturm ( the wedding tower) finds itself in the city’s logo. The tower was gifted by the city to the Duke in 1905 as a wedding gift. Right next to the tower is a Russian chappel which was built for Tsar Nicholas whose wife Alexandra was born in Darmstadt. The chapel was built by Russian stone and some people claim that it was built on soil brought from Russia. 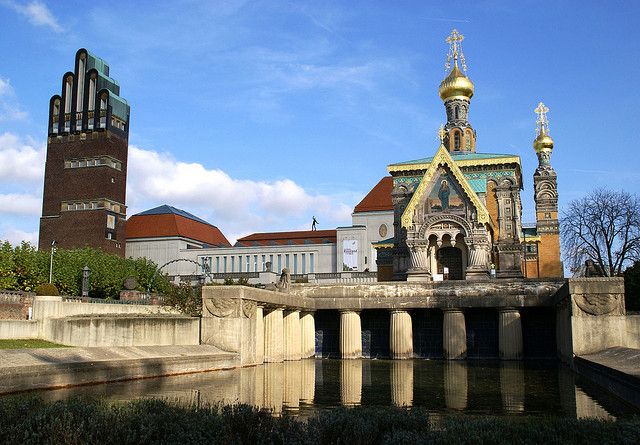 There’s a small garden in front of it. Where one can find texts from Bhagavad Gita. 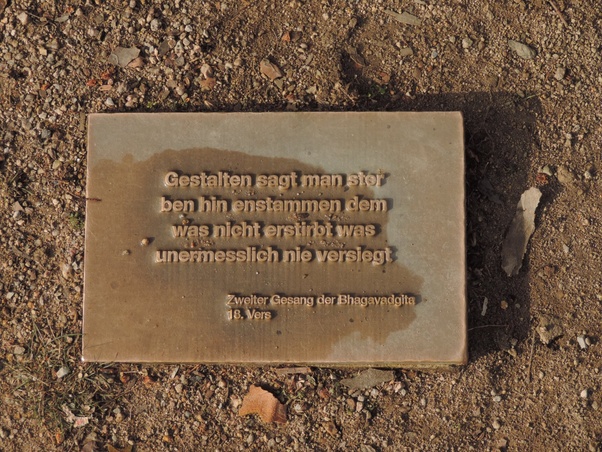 Mountbatten – Every Indian must of heard this name. Lord Mountbatten was the last Viceroy of British Occupied India and first Governor-general of India. The Mountbatten family has its roots in Hessen. The Battenberg family were a branch of House of Hesse-Darmstadt. A part of the family resided in the UK which gave up the name Battenberg and changed it to Mountbatten in 1917 because of anti-German sentiment during the first World war.

Darmstadt was the first city in Germany to force Jewish shops to close in early 1933, shortly after the Nazis took power in Germany.

Luisenplatz, the city centre, was previously called Adolf-Hitler Platz. During the World War- 2, almost the whole city was destroyed. But the Ludwig monument survived. In 1945 the name was changed to Luisenplatz.

All in all, Darmstadt had some dark past but a booming present and bright future. The cultural diversity that you see in the city brought in by students of the renowned educational institutions and the employees of the multi-national organisations and most importantly the acceptance of the diversity by the locals and their curiosity about the new cultures is really mesmerising.

P.S – I had written a similar answer on Quora. https://qr.ae/TjZIBM

2 Replies to “Being Lilien”